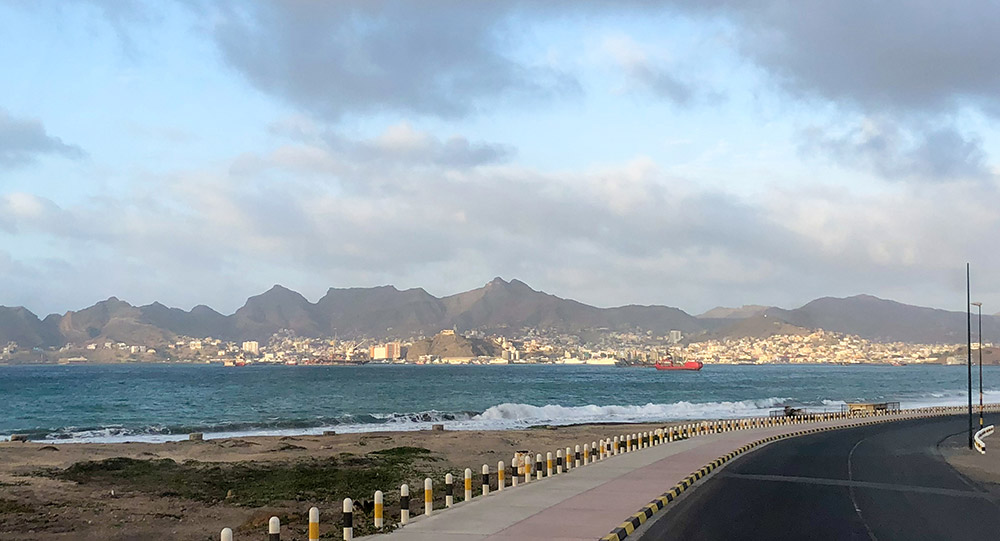 In the lively harbor town of Mindelo “Big Gamer” meet tourists. It is the center of the island of Sao Vicente.

The Cape Verde Islands are the best place in the world to fish for Blue Marlin. Around the island of Sao Vicente, specimens of more than 500 kilograms were caught!

Due to the location, 1800 km south of the Canary Islands and 500 km west of the African mainland, there is a great diversity and enormous amount of different fish. 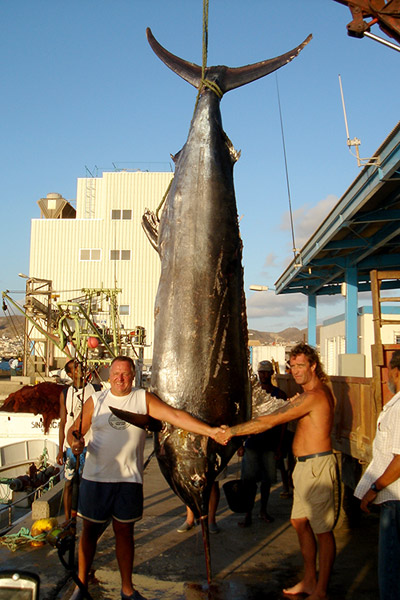 “Nowhere else in the world the impressive blue marlin is represented in such great numbers as Cape Verde.

The largest blue marlin ever caught went on the hook of an angler on the “”Happy Hooker”” with captain Berno Niebuhr. That was in September 2006 in the waters off the island of Sao Vicente. That record marlin weighed 1,241 Lbs or 563 kilograms at a length of 4,58 meters.

Berno Niebuhr is one of Cape Verde’s most experienced marlin hunters. He has been on site for over 20 years. This many years of experience pays off for our customers! 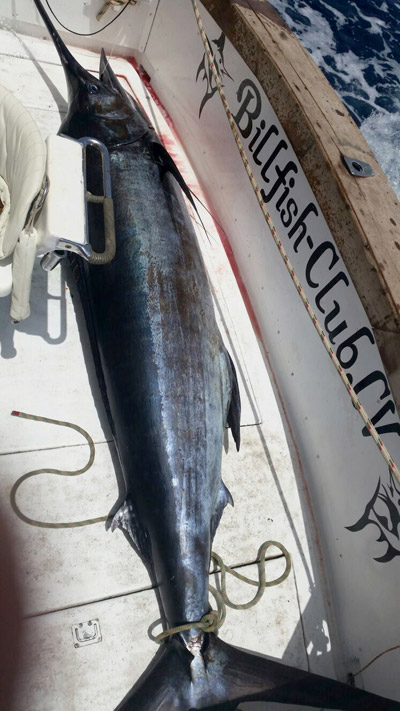 Catches in dimensions round aboutf 700 Lbs / 318 kg are not uncommon.

Here you find the world’s largest occurrence of Blue Marlin. The blue marlin grows up to 4.5 meters in length and can reach a speed of about 90 kilometers per hour, making it one of the fastest fish in the world. Fishing season: Blue marlin is caught all year round, but the best time is between mid-March and early July, and there are still good fishing prospects until September.

The Sailfish is characterized by its large dorsal fin, which can be up to 3.5 meters long. The fish can reach a top speed of 55 kilometers per hour and, like the blue marlin, has a spear-like mouthpiece. Fishing season: The best conditions are between June and August. There are also good chances in September.

The white marlin or spearfish is more than 3 m long and weighs more than 80 kg.
Fishing season: April to September.

The second dorsal fin and the rear fin of the Yellowfin Thun / BigEye are both bright yellow. It can be up to 2.5 meters long and over 200 kilograms in weight. Fishing season: all year round. Best in March, April, June and October – also November and December.

One of the largest populations of Wahoo has been detected near Cape Verde. The Wahoo is a fish of the mackerel family that can reach a length of 2.5 meters. Fishing season: all year round. The best conditions are in the months between December and May.

The Dorada or golden mackerel is widespread and particularly popular in the restaurants in Cape Verde. One of the most common by-catches. Fishing season: July and August are the best months, but June and September are likely to catch a bream.

In addition, you catch the albacore Tuna, Bonito and various Shark species, as well as the speed jigging in addition to huge Amberjacks also a lot of other demersal species. 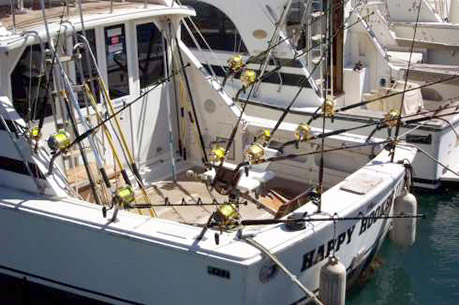 The fishing equipment is only of the highest quality.

Happy Hooker (as an example – all similar yachts)
35 ‘feet, 11 meters Flybridge (Bertram) • 2 x 315 hp • GPS, plotter, depth sounder, VHF radio • 130 cm cool box • Toilet • Liferaft for 8 people. Large comfortable “tournament quality fighting chair”. The fishing equipment consists of 80 lbs Penn International 2-speed and Shimano 2-speed wheels and Penn International II rods of the highest quality. Own fishing tackle can, but does not have to be brought. In the cockpit you are supported by 2 helpers. 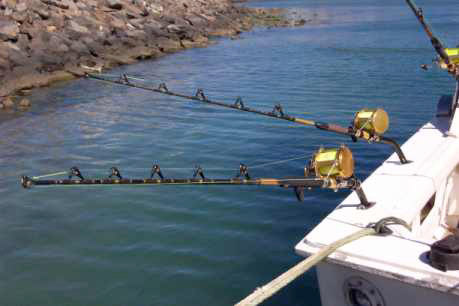 Our offer includes either a complete package with flight, transfer, accommodation and charter boat or you can travel by yourself and book the charter. You can reach the Cape Verde Islands comfortably in four to five hours by charter flight from many German or European airports. 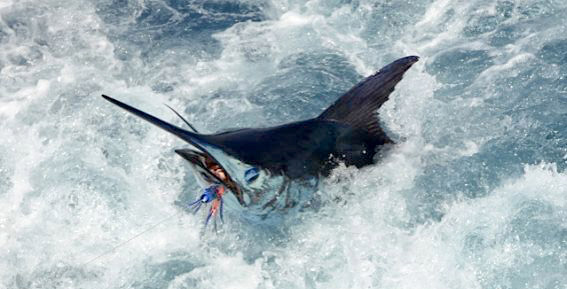 Most marlin are caught on jiggs. 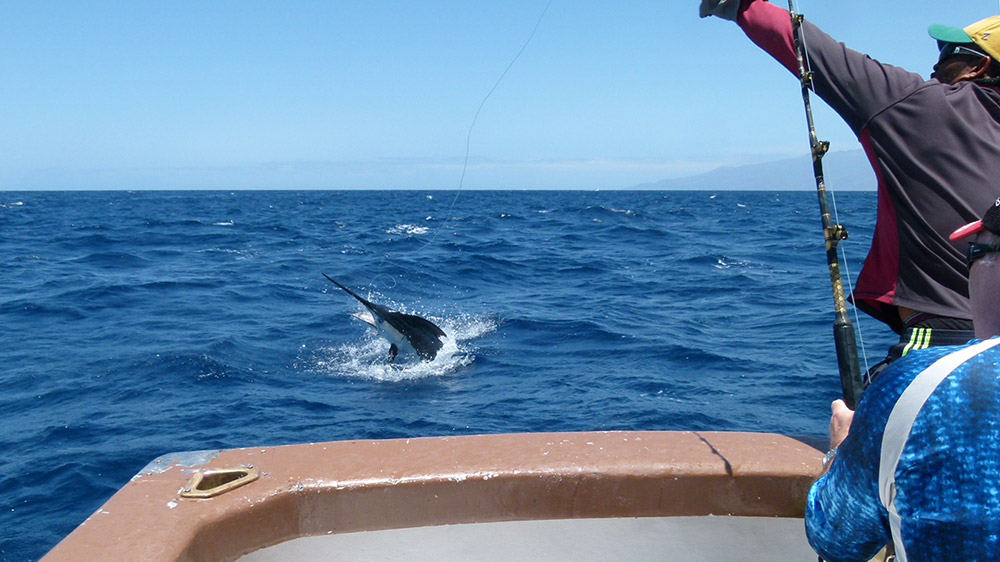 With such a drill, the angler’s heart swells higher.

Traveling on your own

Services at 1 week stay (included in the tour price):

All prices on request.

The prices depend on the the type and size of the accommodation and the number of people accommodated therein. Exact prices are only possible on request.

Please ask for an individual offer … 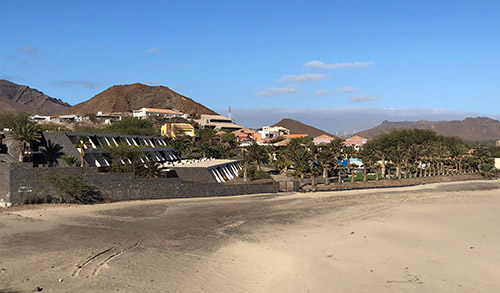 Beautiful hotels are available on lonely beaches or in the city of Mindelo.

You can spend your holidays in a comfortable beach hotel. If you prefer a livelier environment, or would like to live in the immediate vicinity of the port, there are many attractive accommodations to choose from in the town of Mindelo.

You can choose between a comfortable beach hotel or one of the many hotels in the city close to the harbor.

Detailed information and details on travel, accommodation, transfers, fishing and on the holiday in Cape Verde I am happy to give you by phone or by e-mail.  Please contact us and ask your questions!